Six years after the AIA, and patent professionals are no closer to resolving the legal uncertainty it created and its disruption to their business. In fact, a tsunami of acronyms (IPR, PTAB, PGR…) and related court decisions have increased litigation risk and costs. Quality patents are a must to survive this environment, adding further pressure to budgets and to protect your innovation…

How to build a cohesive strategy with options around these legal and budget challenges, which also delivers business results?

Come join your IP peers for a day of learning, benchmarking & networking through panels and break-out groups and head back to the office with actionable insights from the front lines. 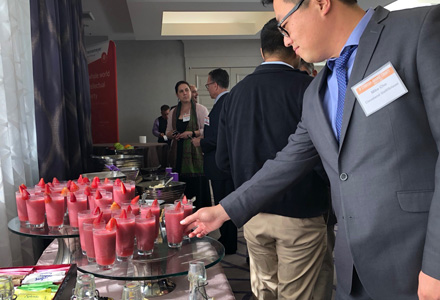 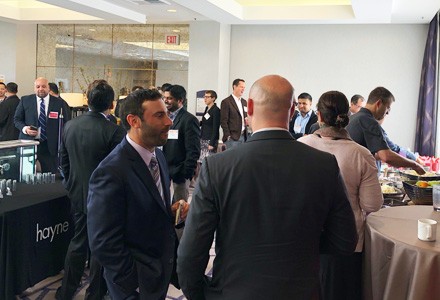 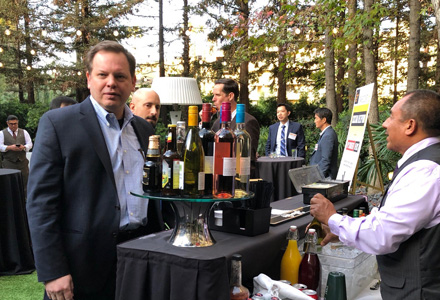 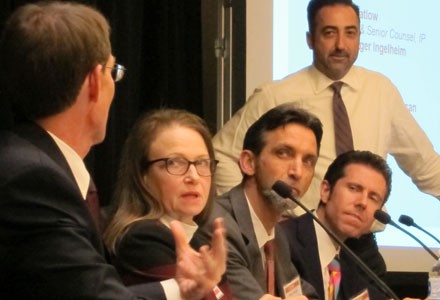 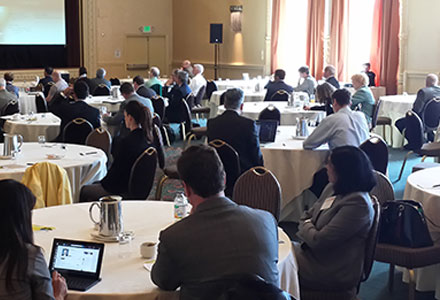 Leonard is Senior Director of Patent and Open Source at Ebay. Previously he was at Microsoft as Patent Technoogy Team Lead, overseeing patent strategy, analysis as well as responsibility over the entire patent team. He has also served as an attorney at Finnegan, Henderson, Farabow, Garrett & Dunner, LLP and Sixbey, Friedman, Leedom & Ferguson as well as Systems Engineer at Lockeed Martin. He's a graduate of the US Naval academy, earning a B.S. in Computer science. He earned his M.S. in Computer and Information Science from Claremont University and his J.D. from Georgetown University Law Center.

Sriranga Veeraraghavan is a Vice President, Legal at Xperi (formerly Tessera). Sriranga supports Xperi’s technology licensing and corporate development efforts in addition to managing Tessera’s litigation matters and post-issuance proceedings. Before joining Tessera, Sriranga practiced law at Cooley LLP and Howrey LLP and worked as an engineer at Sun Microsystems and Cisco Systems. He is a named inventor on two U.S. patents, which are based on his work at Sun.

Before joining Google in 2010, Chia practiced at Ropes & Gray (formerly Fish & Neave) in New York as a patent litigation associate and previously as a patent agent while attending law school.

Tara Stuart practices out of Foster City, CA and handles cases in Intellectual Property as a Patent Counsel at Gilead. Previously she was an associate at Cantor Colburn LLP and Patent Attorney at McKenna Long & Aldridge LLP. She earned her J.D from The John Marshall Law School and has been licensed for 11 years.

Ahsan A. Shaikh focuses his practice on strategic patent portfolio management and client counseling in the areas of software, computer hardware, internet technologies and medical devices. Ahsan is regularly called upon to:

Intellectual Asset Magazine has repeatedly identified Ahsan as a “World’s Leading Patent Professional,” stating that “[h]is clever application of analytics enables him to identify which arguments… are most effective before different examiners, making his advice gold dust to software companies.”

Ahsan speaks on issues related to software patents, computer hardware, the internet, open source, and the video game/interactive entertainment software industry. He has written several articles on the legal issues faced by the software and video game industries, including pieces published in Forbes, Bloomberg, the National Law Journal and the San Francisco Daily Journal. He has also been quoted on these topics in publications such as Variety Magazine and for Reuters.

Prior to practicing law, he gained practical computer industry experience in software coding and web development by working as a web designer.

Kurt Brasch recently accepted a role leading Uber's patent transactions after managing strategic initiatives and patent licensing for Google’s Transactions team. He was named one of the Top 10 IP Personalities by IAM in 2015 for developing and leading Google’s Patent Purchase Promotion and Patent Starter Program. He was also Google’s lead negotiator on the Cisco cross-licence that was signed in early 2014. He came to Google in 2012 after the Google acquisition of his former employer, Motorola Mobility (MMI). At MMI, he was director of outbound patent licensing for the connected home division and also led the intellectual asset management team of 15 technical patent experts. Mr Brasch also drove major initiatives, including the company’s position on patent reform (ie, the America Invents Act) and the overall strategy for the IP business. Before joining Motorola’s mobile device business (later MMI) in 2008, Mr Brasch created and led a start-up consulting business focused on training technical managers. Before that endeavour, he was with Motorola’s government business for 18 years, nine of which were spent in product management. In addition, he held various roles in international logistics, sales support and finance. Mr Brasch holds a BS in finance from Arizona State University and an MBA from Northern Illinois University.

Jonathan Tuminaro, Ph.D. is a director in Sterne, Kessler, Goldstein and Fox's Trial & Appellate and Electronics Practice Groups, and focuses his practice on patent litigation at the United States International Trade Commission (ITC), the U.S. district courts, and the Patent Trial and Appeal Board (PTAB).

Thomas F. Fitzpatrick is partner and co-chair of the Intellectual Property Litigation Practice Group of Pepper Hamilton LLP, resident in the Silicon Valley office. Mr. Fitzpatrick focuses his practice on all aspects of intellectual property, including litigating patent, trade secret, trademark, technology licensing and other related disputes. He has represented both patent owners and patent defendants in federal courts throughout the country, including in the Northern, Central and Southern Districts of California, the Eastern District of Texas, the Eastern District of Virginia, the District of Delaware, the Northern District of Georgia and the District of Arizona. Most recently, Mr. Fitzpatrick has successfully represented internationally based and publicly traded companies in the computer database, telecommunications, semiconductor, Internet and power supply industries. Prior to joining the firm, Mr. Fitzpatrick was a partner in the Litigation Department and a member of the Patent Litigation Group at Goodwin Procter. Then he was a partner in the Palo Alto office of Townsend and Townsend and Crew LLP. Before that, he was a deputy district attorney at the San Mateo County District Attorney’s Office. As a prosecutor, Mr. Fitzpatrick obtained convictions through bench and jury trials. Mr. Fitzpatrick has written numerous articles on patent law and patent litigation. He has spoken on recent developments in patent law to various organizations in the United States and Korea. Mr. Fitzpatrick is a member of the San Mateo Bar Association and a past -member of the California District Attorneys Association. Mr. Fitzpatrick received his J.D. in 1997 from Santa Clara University School of Law, where he received the American Jurisprudence Award in Patent Law and was the research editor for the Santa Clara Computer and High Technology Law Journal. He received a B.A. in 1994 from the University of California Berkeley. Mr. Fitzpatrick is admitted to practice in California, and before the U.S. Court of Appeals for the Ninth Circuit, U.S. District Courts for the Central, Eastern, Northern and Southern Districts of California, the District of Arizona and the Eastern District of Texas.

Kamrin is the Senior Director of Intellectual Property for Codexis, Inc., and is responsible for all aspects of the Codexis global intellectual property portfolio, including patents, trademarks, intellectual property litigation, opinions, trade secret protection, and copyrights, as well as managing collaborative projects, licenses, and other transactional matters. Kamrin holds a Ph.D. in Microbiology from the University of California, Berkeley and a law degree from Santa Clara University School of Law. She has over 20 years of intellectual property law experience including almost 10 years at Medlen & Carroll (5 years as a partner), and approximately 8 years at Genencor International as senior IP counsel.

Over a decade of lab experience as a postdoc and research faculty in molecular biology, microbiology and human genetics.

Experienced in building and managing global legal functions for both small and large companies in the U.S. and China. Solid working experiences in the U.S., Europe (Germany) and China. Licensed to practice law in California. Registered U. S. patent attorney.

Jennifer began her career with a decade of patent prosecution experience in a wide range of technical fields, before shifting her focus to patent litigation. She also has substantial experience with post-grant proceedings before the Patent Trial and Appeal Board (PTAB), such as inter partes reviews (IPRs), post-grant reviews (PRGs), patent appeals and reexaminations. To date, Jennifer has served as counsel of record in 28 PGRs, making her one of the most experienced lawyers in these types of proceedings.

In addition to providing legal services for her clients, Jennifer has been a Lecturer-in-Law at the University of California, Davis School of Law, where she taught patent prosecution and practice, and has lectured on topics related to patent law at the University of California, Hastings College of the Law and Santa Clara University School of Law. She is also a member of the faculty at the Practising Law Institute, and co-chair of the annual Fundamentals of Patent Prosecution boot camp.

During law school Jennifer was awarded the faculty-selected Mabie Award for Outstanding Graduate, peer-selected Graduating Student of the Year, and served as Editor-in-Chief of the Santa Clara Law Review.

Efrain Staino is Senior Direct of IP Litigation at Rovi Corporation, a TiVo Company.  Efrain oversees patent litigation disputes in District Court, the International Trade Commission, and the PTAB.  Prior to joining Rovi, Efrain was an associate at Morrison & Foerster LLP in San Francisco.  Efrain has a J.D. from Santa Clara University and a M.S. in Electrical Engineering from Lund University in Sweden.

Craig is senior litigation counsel at HP. He coordinates and oversees intellectual property and other litigation matters. He has previous counsel experience at WilmerHale where he handled intellectual property litigation matters for technology clients. Vsquez Benisek & Lindgren with a focus on patent infringement and general business disputes for clients in the technology sector as well as Morgan Miller and Blair where handled a range of litigation involving technology, patent, real estate, and general business disputes.

He's earned a B.A. in English from the Unviersity of Michigan and his J.D. from the University of Wisconsin Law School

Bryan Kohm practices intellectual property litigation, with a focus on representing high technology and life science companies in patent infringement and trade secret misappropriation disputes. Bryan has experience in a wide variety of venues throughout the country, including federal and state courts, the International Trade Commission, and the Court of Appeals for the Federal Circuit. Bryan has been recognized as a "Rising Star" in the area of IP Litigation by Northern California Super Lawyers in 2013 and 2014. He was recently appointed co-chair of the ABA’s Committee on Intellectual Property Litigation.

Steven Shape is a registered patent attorney and electrical engineer who has represented preeminent technology companies in complex, high-stakes Intellectual Property litigation and foreign patent and trademark prosecution matters since 1982.

Steven Shape has successfully represented clients in complex business litigation focused on patent infringement claims, trademark and Lanham Act claims, copyright claims, unfair competition claims, false advertising, trade secret claims, and related antitrust and business causes.  He has served as counsel in a number of jury and bench trials and has extensive experience in all aspects of Federal Court litigation including preliminary injunctions, summary judgments and appeals to the Court of Appeals for the Federal Circuit and the United States Patent and Trademark Office.  Steven has represented clients in post grant proceedings (Inter Partes Review (IPR) and Post Grant Review (PGR) and the International Trade commission (ITC).

Steven Shape has been a partner at prominent IP law firms including Am Law 100 firms throughout his career.

He is licensed in Illinois, Wisconsin and many U.S. federal courts, the United States Supreme Court, the Court of Appeals for the Federal Circuit and the United States Patent and Trademark Office (Reg. No. 30,802).  He received his Juris Doctorate from DePaul University and his Electrical Engineering degree from the University of Illinois, Urbana-Champaign.

Jonathan litigates patent infringement actions in federal district courts across the country, in the Court of Appeals for the Federal Circuit, and in state courts, both representing patent owners seeking to enforce their rights and defending companies against allegations of infringement.